Daniel-Lesueur has always been a woman of action, always committed and devoted, always listening carefully her female contemporaries. She created or took part during her life in several important charities.

She was a great philanthropist, a committed but balanced feminist, a patriot full of life who devoted her literary talent to the cause of her native country. She was awarded for her various activities during her living.

She shared the commitment of her husband, Henry Lapauze, for artists, (like Felix Ziem, Theobald Chartran, Ingres, etc.), in favour of her husband’s hometown (Montauban), of the United States and of the protection of art pieces against the enemy, in favour of Gallieni (vs Joffre’s main headquarter), etc… Daniel-Lesueur has written dozens of poems, several articles to restore courage to the Parisians, as well as some war reports. For example several tributes, such as for the Centenary of the Tarn-et-Garonne district, or tributes to Ziem, Chartran, Ingres, Sarah Bernhardt or Gallieni. Her poems are most of the time read by members of the Comédie Française. 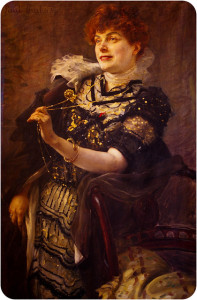