In 1882 Jeanne Loiseau published her first novel, Le mariage de Gabrielle, edited by Calmann-Lévy. Her editor demands her to choose a masculine pseudonym; she eventually took the one of a maternal great-uncle, Daniel O’Connell (the Irish Liberator), and of her mother’s maiden name. She published during the same year a poem collection: Fleurs d’avril (edited by Alphonse Lemerre). Novels and poems are awarded by a double Montyon price of the Académie Française.

Her literary work is varied. She explored different literary genres: more than 30 novels, poems (3 collections published until 1897 and many poems dedicated to special events), translations (the whole work of Byron in 3 tomes), literary criticism, articles, conferences and dramatic art. Her theatre pieces were played in several Parisian theatres (l’Odéon in 1894, the Feminist Theatre in 1897 or the Sarah Bernhardt Theatre in 1905) and in Brussel, Italy or Russia as well.

As a journalist she wrote literary columns in several newspapers, in particular the literary pages of L’Indépendant Belge, the societal rubric of the Marguerite Durand’s feminist daily La Fronde (from 1897 to 1903), but also the sections “en beauté” in the Femina magazine and “Mouvement littéraire” in the one of her husband (La Renaissance politique, littéraire et artistique) from the foundation until her death. More than one hundred articles were published in such a way!

She was awarded by her peers for her work, especially with 6 prices of the Académie française, including 2 Grand Prizes (Grand Prize of Poesy in 1885 for her Sursum Corda! poem; Grand Prize Vitet in 1905 for her entire work).

More information about these 6 prizes.

She received important decorations, from French and Belgian governments, and from the Société des Gens de Lettres as well. 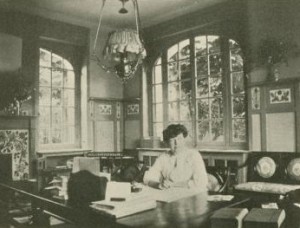