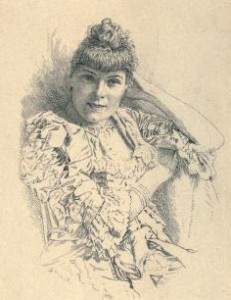 Daniel-Lesueur (1854-1921) is the masculine pseudonym of Jeanne Loiseau. She was a talented female writer, but also a great philanthropist and a feminist who committed sensitively to the defense of women’s rights.

Perfectly bilingual, she excelled in various literary genres, as novels, poesy, translation and theater. She was known for the quality of her writings and received 6 awards from the Académie Française, including 2 Grand Prizes. Her theatre pieces were played successfully in several places in Paris (l’Odéon, the International Feminist Theatre, the Sarah Bernhardt Theatre) as well as in Brussels, Milan, Moscow,…

Thorough bibliography of Daniel-Lesueur (in French).

In 1907 she becomes president of the Vie Heureuse Award (known later as Prix Femina) that she contributed to found.

She was a woman of action, full of energy and committed to helping people in need. As such, she created several important charities: the Denier des veuves de la SGDL (1913), the Aide aux femmes de combattants (1914), the Croisade des Femmes Françaises (1915), and even a foster home for soldiers in 1918 near the battlefield.

As a woman awarded and adulated by her contemporaries, she was the first female writer to become member of the Legion d’Honneur (Knight in 1900), and the fifth woman to become Officer (1913) since the set-up of the Order. Except for the Femina Award, Daniel-Lesueur is almost exclusively known today by the residents of the Avenue which has been bearing her name in Paris since 1912. Very wrongly!

She died in 1921 and received posthumous tributes from all political spectrum, in France and abroad.